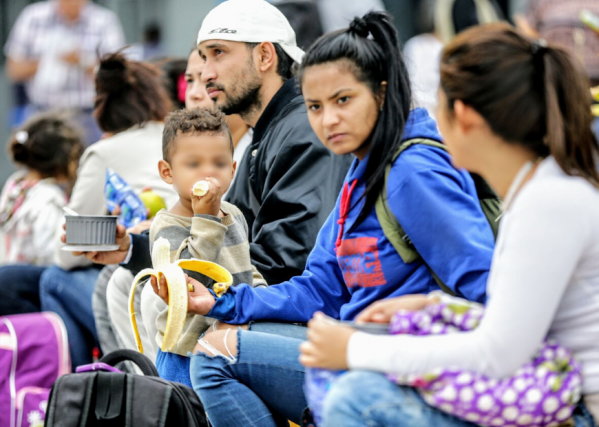 When Barreto Yasmerys arrived in Peru last year she planned to earn some money before sending for her teenage daughter in Venezuela. The 39-year-old former teacher picks up odd jobs but has been unable to secure formal employment without her papers in order. She has applied for asylum but her appointment is not until July 2021.

She’s worried her daughter will turn 18 before she gets permission to bring her to Peru. “I left her with my mother in Venezuela, I thought I had time to bring her here. But the asylum process is complicated.”

We’re standing outside the commission for refugees in the San Isidro district in Lima. A small crowd of Venezuelans has gathered around a notice outside the building’s main entrance. It explains that the commission has temporarily halted public appointments while it moves to another location.

Cristobal Vegas left his home in the city of Barquisimeto in northwestern Venezuela a year ago. He was supposed to collect his refugee identification card today but received no notification the office had closed. Like many Venezuelans in Lima, he has struggled to hold down a job. There’s a growing perception that Venezuelan men are criminals or murderers, he says.

“We’re human beings who came here to find work. I’ve worked as a taxi driver, an electrician; I do whatever I need to [to] look after my family. Of course there are some bad Venezuelans, there are bad people in every country. But most of us just want to work.”

More than 5 million Venezuelans have migrated abroad since 2015, fleeing poverty, hunger, fuel shortages and political turmoil, creating the second-largest displacement emergency in the world after the Syrian crisis. This number is expected to rise to 8 million by the end of 2020.

Perhaps given its own history of emigration (an estimated 3.5 million Peruvians have moved abroad in recent decades) Peru initially welcomed Venezuelans with open arms. However, the country has started witnessing a surge in xenophobia towards the more than 870,000 Venezuelans who have arrived since 2017.

Amnesty International has praised Peru for initially displaying “admirable generosity”, but also accused the government of more recently “engaging in a deliberate policy of turning away asylum-seeking women, men and children from Venezuela”.

The government’s decision to stop distributing the temporary-stay PTP permits (Permiso Temporal de Permanencia), which allowed Venezuelans to work or study, and introduce a new system of humanitarian visas has been strongly criticised. Venezuelans must obtain the visa from Peruvian consulates in Venezuela, Colombia or Ecuador and need a passport to qualify – a document which only half of Venezuelans reportedly hold.

Asked in February whether he believed Peru had made the right choice in withdrawing the PTP programme, the country’s foreign minister Gustavo Meza-Cuadra said the government was working hard to support both Venezuelans in Peru as well as neighbouring countries struggling to deal with the influx of migrants. “Never for one moment have I thought Peru’s response has not been generous. Quite the contrary.”

The increasingly frequent media portrayal of Venezuelan men as dangerous and unpredictable has contributed to a growing sense of fear towards them. Research published by the Pontifical Catholic University of Peru earlier this year found that more than half of Peruvians living in Lima who were surveyed said they were scared of Venezuelans.

Some 80 per cent believed many Venezuelans were involved in crime, while 30 per cent said migrants should be stopped from entering the country.

“In recent months Venezuelans have been used as scapegoats for the many issues in Lima – delinquency, insecurity and a lack of services,” says Cécile Blouin, an investigator with the university’s centre for democracy and human rights. “These people’s views are just a reflection of the climate of fear being fed by the media, which uses isolated criminal offences to propagate generalisations and stereotypes about Venezuelans.”

In June 2019, Peru’s president Martín Vizcarra said the new humanitarian visa would promote “safe and orderly” migration. The president made the announcement from an airport runway, while behind him a group of Venezuelans facing deportation for providing false documentation were led on to a plane.

“Never have I seen such an explicitly xenophobic act,” says economist Elmer Cuba. “He was directly associating Venezuelans with crime. It creates a terrible public image validating judgments you hear on the radio.

“Violence and security issues in Peru have not worsened with the arrival of Venezuelan migrants but the press has framed it in that way. Statistically Venezuelans in this country are no more violent than Peruvians but this image of the delinquent migrant continues to be disseminated.”

In January 2020, a specialised police force to tackle migrant criminality was established, despite data which shows fewer than 2 per cent of crimes carried out in 2019 were perpetrated by foreigners. The arrival of the force came a week after a raid on a hotel in the town of Punta Negra, south of Lima, where 114 Venezuelans were arrested for possession of firearms and reportedly planning armed attacks.

Victor Marcano, who works in Lima’s sprawling La Gamarra textile district, says Venezuelans were viewed in a more positive light when he arrived two years ago. “There was work everywhere and xenophobia wasn’t an issue. Now it’s difficult to hold a job for longer than three months. People shout at you in the street and tell you to go back to your own country.”

Marcano carries his PTP permit wherever he goes. “The police are constantly checking our papers. They arrive here in buses to carry out raids. But I’m living here legally, I work to support my family and send money back to Venezuela.”

Raquel Moreno works in a nearby clothes shop. She’s reluctant to speak and is worried her boss will think she is ungrateful. She came to Peru with her husband two years ago, leaving her two children with her parents.

“I arrived in winter and my plan was to make some money and then travel back in summer to bring them here. But the situation has become far more complicated. Whatever I earn I send straight to my mother to look after the kids.”

When asked what it’s like being so far from her children, the 26-year-old bursts into tears. “It’s so difficult. No one wants to be separated from their child. You only leave because you think it makes more sense to find work.”

About 12km north of the Gamarra district, on the outskirts of Lima, Juana sits in the communal area of a refuge for Venezuelan migrants. The 63-year-old followed her son to Peru six months ago. She suffers from diabetes and needs regular insulin injections.

“I would have died in Venezuela, I had no access to food or medication. My son insisted that I come here but I can’t afford healthcare here either.”

Juana has not applied for asylum and is confused about how the process works. She feels nervous around police and is too frightened to travel across the city to the migration office.

“I’d never left Venezuela in my life before coming here, I never imagined I’d have to leave my home. I can’t go back but I feel scared here.”

Raul Valdivieso, also from Venezuela, helps run the Albergue sin Fronteras (Refuge without Borders) centre, which offers food and accommodation to nearly 100 families. “Ninety-five per cent of these people don’t own a passport. The state is forcing them to enter the country illegally. The numbers arriving have gone down but there’s more children and vulnerable, elderly people coming.”

Eglis Silva arrived five months ago with her husband Ramon Jarra and three-year-old daughter. She is heavily pregnant and lies on a bunk bed in a dark, stuffy bedroom at the refuge. Jarra, who used to work as a police officer, shows me his empty wallet. The family was robbed in Colombia and slept on the streets until they found the refuge.

Silva left six children behind in Venezuela with her first husband and planned to send for them once she had settled. The couple have been granted asylum but Jarra cannot find work. “I’ve tried selling sweets on the street but no one wants to buy from a Venezuelan, we have a bad reputation here.”

Not all Venezuelans have found themselves in such a desperate situation. Middle-class professionals who arrived as part of the “first wave” of migrants have started settling into the community. However, many have found their qualifications are not recognised in their new home.

Anngy Garcia, a chemical engineer, arrived with her husband Roberto Rincon (an architect) and their daughter Victoria two years ago. Garcia, who now works as a teacher, says Venezuelans are paid less than their Peruvian colleagues.

The couple are speaking to me outside Lima’s migration office, where they have come to collect their daughter’s identity card. “We believed our qualifications would be recognised here but he [Rincon] has been out of work for six months now,” says Garcia. “We thought there were advantages to living in Peru but with the latest wave of migration this country has become saturated with Venezuelans.”

Victoria, who is 12, liked Peru at first and found it easy to make friends. However, her classmates have started treating her differently. “They saw news reports about Venezuelan criminals and I’m [the] only Venezuelan in the school. They never say anything to me directly but I can hear them saying: ‘Be careful, she’s Venezuelan, she’ll murder you.’

“I try not to take notice of them, they don’t know what they’re talking about. But it still makes me feel bad.”